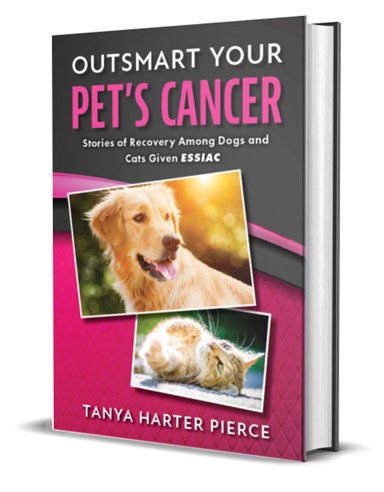 When Tanya Harter Pierce was putting together the stories for her book, “Outsmart Your Pet’s Cancer“, she contacted us.  Tanya was doing extensive research to find dog and cat owners who had given Essiac Tea to their pets after they were diagnosed with cancer.  She found out about the story of our beloved dog, Moe, and asked if we would share it so that she could include our experience in her book.   Tanya included Moe’s story as one of the chapters in her book, and we are sharing that chapter below.

In the book, you’ll find 22 heartwarming dog and cat recovery cases with photos of each pet.  Plus,  you’ll find how to effectively give this affordable non-toxic herbal remedy to your pet.

You’ll also read a synopsis of Essiac Tea’s intriguing history.  It is a powerful cancer treatment that has been used since the early 1930’s, and it is thought to be able to help with any type of cancer and benign masses as well.  But no one had written a book focusing on using Essiac Tea for pets until now.  We are so thankful to Tanya for providing this valuable and potentially life-saving information to the world.

If interested, you can go to OutsmartYourPetsCancer.com and read about more pet cases, or you can purchase the book or Kindle eBook at Amazon by clicking this link.

The chapter about Moe:  excerpt from the book, Outsmart Your Pet’s Cancer: 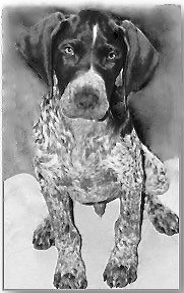 DEENA AND HER HUSBAND, Bob, adopted Moe and his brother, Larry, as puppies. (Moe’s puppy picture is shown above since no acceptable adult picture of him was available.) Originally, they had planned to adopt just Larry from one of Bob’s coworkers who had a litter of German Shorthaired Pointers. Deena explained, “Bob had had a Pointer while growing up and loved the breed, so when the puppies became available, we really wanted to adopt one. Larry was the pup up for adoption and the family planned to keep Moe, who was the runt of the litter. When the family saw how much we loved Larry from the very beginning, they asked us if we would also like to adopt Moe. They already had a couple of dogs, and the lady was pregnant, preparing for a third child. So they were quite busy and realized it might be best for Moe to go to another family. We were elated as we loved both dogs from the outset. Larry was the laid-back one, and Moe was the alpha dog. Although he was much smaller than Larry, he was quite the bully, very bossy, and knew how to get what he wanted. He loved the attention so much that when Larry had a cranial cruciate ligament surgery and limped around due to being in a leg cast, one day we noticed Moe limping in the same manner! We still laugh when we think about it.”

Deena and Bob always fed their dogs high-quality food and treats. In fact, Deena has had an online business for many years called “Healthy Food for Pets” which allows her to sell healthy versions of dog and cat food along with various treats, supplements, and other pet products. So, she is quite an expert.

But good food was not enough to keep one of the dogs from developing cancer. At nine years old, Moe developed a large malignant tumor just underneath the skin at the back of his neck. What was alarming was that the tumor occurred right under the spot where Deena and Bob had applied Moe’s transdermal flea treatment once every month for at least 3 years. It was impossible not to make the connection that this cancer may have been caused by the toxicity of these monthly flea treatments.

Sadly, Moe’s veterinarian said the tumor was inoperable and terminal. At this point, Moe was already in a state of extreme distress. He was having trouble walking normally and had lost control of his bowels. The vet said Moe would probably not live more than 3 weeks more.

Deena and Bob immediately started trying various holistic healing methods on Moe, including acupuncture, medicinal mushrooms, and supplements recommended by a holistic vet they consulted. But nothing was stopping the progression of cancer and Moe went downhill fast. Soon, he was so weak he could not lift his head off the floor most of the time. Bob and Deena reluctantly made an appointment for euthanasia.

However, just before the appointment date, a friend of Deena’s told her about an organic 4-herb version of Essiac Tea from the Herbal Healer Academy in Arizona, with the thought that it might be helpful for Moe. Deena acted fast and had some Essiac from HerbalHealer.com mailed to her overnight. She then brewed it up immediately into tea and stored it in the refrigerator. Deena had been told that twice a day is typically a maintenance dose or for minor issues but that, for cancer, the tea should be administered 3 or 4 times a day. She was also told that it was most effective when taken on an empty stomach. Because Moe’s condition of distress was so advanced, Deena gave him about half an ounce of the cold tea mixed into the same amount of warm water four times a day. (Moe weighed about 65 pounds.) Luckily, Moe liked the taste of the Essiac in warm water and lapped it up from a bowl.

According to Deena, after just the first dose, Moe raised his head a little. She continued to give him the Essiac four times a day and, as each day went by, Moe improved a little bit. So, the appointment for euthanasia was canceled and Deena just kept giving Moe the Essiac Tea. Pretty soon, Moe was running around and enjoying life again! People called him “The Miracle Dog,” and the veterinarian who’d said he wouldn’t live more than 3 weeks was totally amazed.

Moe lived one more year, still taking Essiac until he developed a kidney infection from which he could not recover. He had been battling kidney issues for at least a couple of years. But for that last year, there was no more evidence of cancer!

Fortunately, Moe’s experience of developing cancer and then being cured of it was not just a gift to Moe and Deena, and Bob. It was also a gift to pet owners in general. This was in part because Deena started to sell Essiac Tea from her pet product website and has been helping to save other dogs from cancer ever since—and also in part because it prompted her and Bob to look into how dangerous toxic flea treatments can be. Though they could never be sure whether the conventional transdermal flea treatment they had given to Moe had caused his cancer or not, Deena was horrified to find out that many of these treatments are known to be neurotoxins. So she decided not to use that type of toxic flea treatment on any dog again. Instead, she found a totally non-toxic alternative that works extremely well, which she now sells from her website so that other dogs won’t have to be subjected to a toxic treatment that might cause them to develop cancer or some other health problem.

The non-toxic product Deena sells is called “Flea-Free,” and is a liquid supplement that combines vinegar, ginger, garlic, and lemon juice to repel fleas. Pet owners put just a teaspoon or two into their dog’s food and/or water on a daily basis.   According to Deena, the ingredients in Flea-Free build a barrier around a particular protein in the animal’s body that fleas need to ingest to survive. But it does not interfere with the dog’s own use of that particular protein. It just interferes with the fleas’ use of it. Deena says it takes from 3 days to 3 weeks for this barrier to build up enough throughout the dog’s body to effectively stop a flea infestation. To read more about Flea-Free and other healthy pet products, go to HealthyFoodForPets.com.

Thanks to Essiac Tea, Deena and Bob were able to watch Moe have a miraculous recovery from cancer.  And, thanks to Moe, more pet owners will find out about Essiac and other healthy non-toxic products. 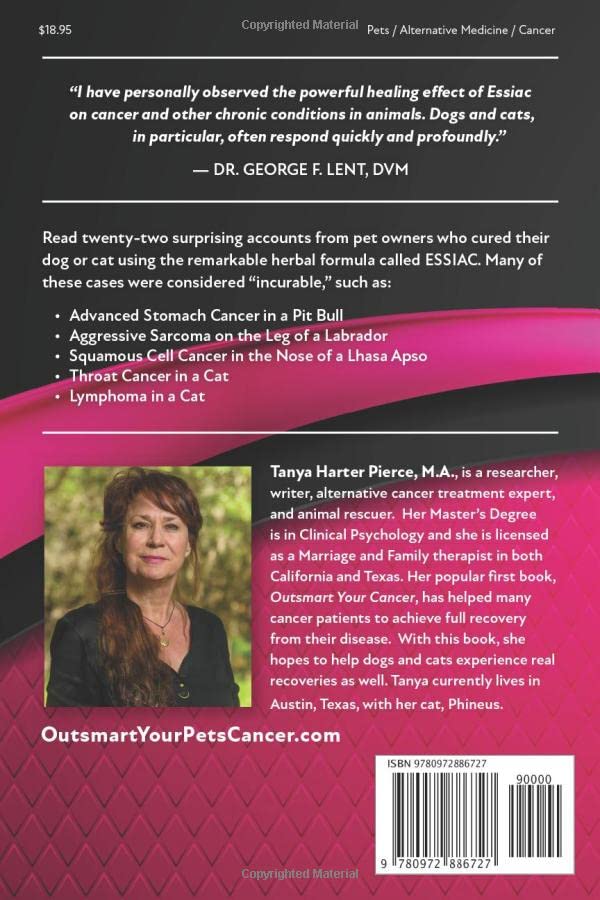