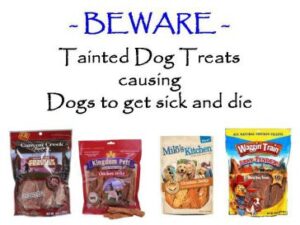 The Veterinary News Network recently published a story which claims: “Chicken jerky treats consumed by dogs that became sick have been found to be tainted by the insect repellent DEET and the drug amantadine, according to a veterinary pathologist leading an independent probe of the ongoing pet treat mystery.” ( Source: VIN News Service)

The FDA has posted a new update:

Case numbers: Since FDA’s last update on October 22, 2013, we have received approximately 1,800 additional case reports. As of May 1, 2014, we have received in total more than 4,800 complaints of illness in pets that ate chicken, duck, or sweet potato jerky treats, nearly all of which are imported from China. The reports involve more than 5,600 dogs, 24 cats, three people, and include more than 1,000 canine deaths. The breakdown of symptoms associated with the cases is similar to that of earlier reports: approximately 60 percent of the cases report gastrointestinal/liver disease, 30 percent kidney or urinary disease, with the remaining 10 percent of complaints including various other signs such as neurologic, dermatologic, and immunologic symptoms. About 15 percent of the kidney or urinary cases also tested positive for Fanconi syndrome, a rare kidney disease that has been associated with this investigation.

Testing of jerky pet treats from China has also revealed the presence of the drug amantadine in some samples containing chicken. These samples were from jerky pet treats that were sold a year or more ago. Amantadine is an antiviral that is FDA-approved for use in people. It has also been used in an extra-label manner (using an approved drug in a way that isn’t listed on the label) in dogs for pain control, but FDA prohibited its use in poultry in 2006.

FDA does not believe that amantadine contributed to the illnesses because the known side effects or adverse events associated with amantadine do not seem to correlate with the symptoms seen in the jerky pet treat-related cases. ( Source: FDA Veterinary News Updates)

Avoid All Jerky Treats, especially those from China.

The ideal reaction would be to induce vomiting in a dog that has recently consumed Jerky Treats ( ie with 60 minutes), consider adding in activated charcoal to bind with the treats preventing absorption, then watching for any signs and seeing a veterinarian ASAP if anything appears.

Healthy Food for Pets offers safe and nutritious dog treats having NO ingredients from China.

And for treats manufactured by Life’s Abundance, click here!

Important Disclaimer: The stories and information on this site are not meant to diagnose or prescribe for you. If you or your pet has a medical problem, you should consult your medical doctor or veterinarian. The ideas and information on this site have not been endorsed or approved by the FDA.  In no event shall the owners of this website be liable for any damages whatsoever resulting
from any action arising in connection with the use of this information or its publication, including any action for infringement of copyright or defamation. The decision to use, or not to use, any information is the sole responsibility of the reader. Opinions expressed here are those of individual contributors. This web site does not verify or endorse the claims of contributing writers.

Itching and Scratching the Winter Away