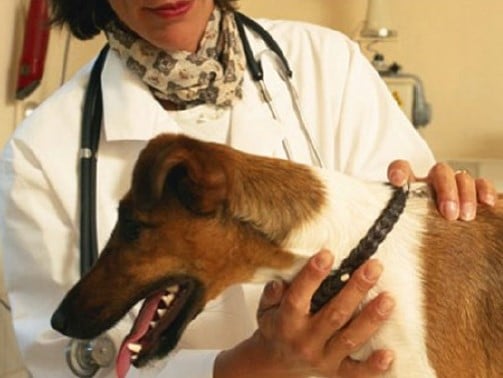 A ruptured cranial cruciate ligament is a fairly common-and very painful-knee injury among human athletes. Dogs are also susceptible to this problem, but not because they play football. For dogs, this is a long-term progressive disease that can lead to arthritis and other permanent degenerative changes of the joint. Dr. Dianne Dunning, a small animal surgeon at the University of Illinois Veterinary Teaching Hospital in Urbana, is trained in a new procedure to treat this condition.

“It is important to understand the anatomy of the bones in the hind leg in order to understand this condition,” says Dr. Dunning. The femur is the large bone of the hind leg, which attaches to the pelvis. It rests on the tibia, and the joint is stabilized by the joint capsule, surrounding musculature, and ligaments, one of which is the cranial cruciate ligament. This ligament prevents the joint from bending too far the wrong way (hyperextending). It also prevents rotation of the joint and prevents the tibia from sliding forward.

When this ligament ruptures, the joint becomes unstable and the femur is allowed to move freely over the tibia, pulling and tearing the joint capsule of the knee.

“This type of instability is very painful and can cause joint swelling and hemorrhage,” says Dr. Dunning. “It can also cause abnormal wear of the bony and cartilaginous structures found in the knee, leading to long-term problems such as degenerative joint disease (arthritis).”

Animals suffering from this problem may be lame for a few weeks or months and then may seem to get better only to develop a more chronic progressive lameness that never resolves and worsens with exercise.

“Doctors generally diagnose this problem by examining the gait or walk of the animal, by feeling the joint, and by checking for abnormal mobility of the joint, called cranial drawer sign or cranial tibial thrust,” says Dr. Dunning. “Using this test, the joint can be manipulated forward and backward, a movement normally prevented by the cranial cruciate ligament.”

After the problem has been diagnosed, radiographs are usually taken to determine the extent of the damage in the joint, and to make sure there are no other underlying problems such as a tumor or some other erosive disease.

In the past, treatment for this condition has consisted of stabilization of the joint either by implanting a false replacement for the torn ligament or by placing an external strut on the outside of the bone to stabilize the joint. “The problem with those techniques is that they do not perfectly replace the ligament that Mother Nature put there, so arthritis usually progresses and mobility of the knee is usually affected to a certain extent,” says Dr. Dunning.

A new procedure called a Tibial Plateau Leveling Osteotomy (TPLO) has the potential to be much more effective in treating the problem and preventing future degenerative changes in the joint.

TPLO changes the mechanics of the knee and is based on the theory that dogs with this problem are predisposed to it because of abnormal sloping of the head of the tibia (called the tibial plateau). This sloping causes the femur, which rests on the plateau, to slip backwards and off the tibia, thereby putting constant force on the cruciate ligament and making rupture more likely.

In the Tibial Plateau Leveling Osteotomy procedure, the angle of the tibial plateau is altered by making a circular cut in the top of the tibia and then rotating the piece so that the load-bearing surface of the bone is flat. A plate is then attached to hold the piece of bone in this new position as it heals.

“Think of a cart on a hill,” says Dr. Dunning. “On the hill, the cart would have a tendency to roll, but on a flat surface the cart would remain at rest.” This surgery keeps the femur on a flat plane, eliminating the need for the knee to be stabilized and removing the need for the cruciate ligament altogether. While performing the TPLO procedure, the surgeon usually clears the joint of debris and dead tissue to reduce further progression of arthritis.

While this procedure will not eliminate all signs of degenerative changes in the joint such as arthritis, it does minimize the problem and gives the dog almost complete functionality of the joint. Because the TPLO requires cutting the tibia, the procedure usually takes at least 8 to 16 weeks to heal, but patients are able to bear weight on the joint almost immediately after surgery.

“Generally these patients do very well post-operatively,” says Dr. Dunning. “They show improvement almost immediately, whereas with the older procedures post-operative pain and lameness usually worsened before it improved.”

The Tibial Plateau Leveling Osteotomy is a patented procedure and surgeons must take an advanced course prior to performing the surgery.

If you have any questions regarding the Tibial Plateau Leveling Osteotomy procedure or about cranial cruciate rupture, please contact your local veterinarian or call the University of Illinois Veterinary Teaching Hospital at 217/333-5300.

Important Disclaimer: The stories and information on this site are not meant to diagnose or prescribe for you. If you or your pet has a medical problem, you should consult your medical doctor or veterinarian. The ideas and information on this site have not been endorsed or approved by the FDA.  In no event shall the owners of this website be liable for any damages whatsoever resulting from any action arising in connection with the use of this information or its publication, including any action for infringement of copyright or defamation. The decision to use, or not to use, any information is the sole responsibility of the reader. Opinions expressed here are those of individual contributors. This web site does not verify or endorse the claims of contributing writers.

They Call It Dog Breath For a Reason