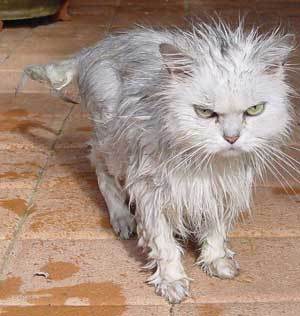 shampooing your own pet, here’s some little-known information and a few tips, just for you! When animals owned or homeless are outside, they
pick up all kinds of stuff in their coats from dirt, burrs, fleas, ticks and the list goes on. The more regularly you
wash your pet, the easier it is going to be on the both of you—physically and psychologically. There’s
ultimately going to be less matting, dander and dirt for you to deal with and getting your pet into a routine will mean less coaxing and cajoling on your part.

We all know that cats have a special relationship with water. In fact, they generally abhor it. However, cats do need to be bathed at least once every season aside from winter. Yes, cats are skilled groomers, but let’s face it: their tongues don’t come with soap. It’s important to bathe cats because loose hairs can cause allergies, and dead skin that often
looks like dandruff is a very enticing breeding ground for bacteria.

The minute they see that you are about to carry them to the sink, that cuddly creature will transform into a scratching, snarling beast. In case you haven’t already found this out the hard way, you can’t keep a cat in the sink the same way you can a dog.   Their bodies are nimble and lithe—the ballerinas of the pet world. They will squirm and bite their way out of your jurisdiction before you can even blink twice. So, we recommend using an adjustable screen, the kind that you would place over a window.   Adjust the screen to fit the size of the sink and position it against the side of the sink the way you would position a ladder against the wall. If you place your cat in the sink, it will freak and try to grab on to anything.

Some dogs have naturally oily skin. If you take your finger and feel between the shoulder blades and you get a film on your hands, it’s definitely time to shampoo. A buildup of oil also means a buildup of bacteria. This may mean a weekly or generally a bi-weekly washing.   If you don’t feel a film on your fingers after a few weeks, then lucky you; it may mean a monthly washing.

Sometimes, the frequency with which you wash your dog has to do with its lifestyle and its breed.  For instance, white and light colored dogs generally need to be washed more often than dark colored dogs. And for those of you small breed owners out there: yes, you like to treat them like little dolls, but beware of over washing. Washing too often dries out the coat, resulting in hair loss and even sores. Athletic dogs or dogs that spend plenty of time outdoors should be washed every two weeks or maybe even every week. Some dogs, unfortunately for some of us, like ponds and mud so that they may warrant a weekly washing. Other dogs just have odors and its better to wash prior to the odor getting worse.

Important Disclaimer: The stories and information on this site are not meant to diagnose or prescribe for you. If you or your pet has a medical problem, you should consult your medical doctor or veterinarian. The ideas and information on this site have not been endorsed or approved by the FDA.  In no event shall the owners of this website be liable for any damages whatsoever resulting from any action arising in connection with the use of this information or its publication, including any action for infringement of copyright or defamation. The decision to use, or not to use, any information is the sole responsibility of the reader. Opinions expressed here are those of individual contributors. This web site does not verify or endorse the claims of contributing writers.

The Golden Years: How to Love a Geriatric Pet