Checking for ticks should be a daily routine if your dog spends a lot of time outdoors. Here are some tips on how to find ticks and then safely remove them. 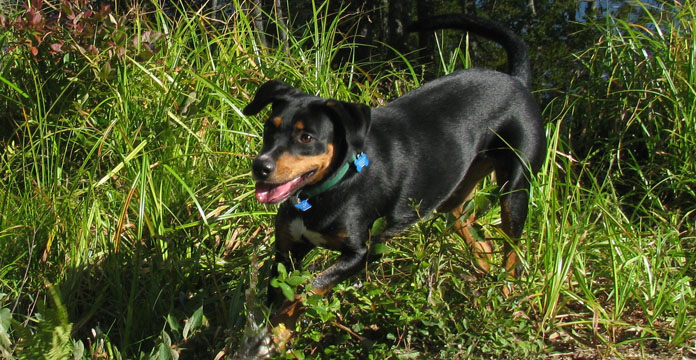 When looking for ticks on your dog, it’s easy to overlook them because they are so small, and their bites don’t itch.  So it’s important to check your dog routinely. Inspect his/her entire body and concentrate on warm, moist areas that ticks prefer, such as under collars and around the neck.

If you feel any lumps or bumps that are not nipples or skin growths that you were already aware of, look at the lumps with a magnifying glass to determine if they are ticks.

Once you find a tick, remove it as soon as possible.

The safest way to fully remove a tick is by doing so with a tool specifically created to easily remove the ENTIRE tick – while not touching or squishing the engorged tick.

This is important because ticks carry disease, including Lyme’s Disease and ehrlichiosis, among others. If the tick is squished during the removal process, the tick can vomit its stomach contents (which may contain dangerous pathogens) into your dog. This is the problem with using traditional removal methods, such as tweezers, lighted matches, etc. Also, while these traditional methods may successfully remove the tick’s body, they may not remove the head.  So for the safety of your dog, it is vital to remove the ALL of the tick, not just part of it.

Since it is a bleach, this method should not be used for dark-haired dogs.

How Not To Remove Ticks:

Pulling on a tick, even with tweezers, can tear the mouth parts from the body of the tick, and pathogens carried by the tick can be expelled onto your dog.

These can upset or harm the tick and almost always cause the tick to expel its stomach contents back into the host – your dog.

This can force the tick to release disease causing body fluids into your dog.